Hard to believe that another Lone Star Classic has come and gone. This is a great event and is put on by our good friends from the Lone Star Corvette Club. LSCC is the largest individual Corvette club in the country with over 1000 members.  The event is 100% volunteer driven, and they strive hard to make sure that every participant walks away with a smile.

We enjoyed meeting many of our existing customer that have Corvette Insurance through us.  We met many new friends that didn't know the National Corvette Museum had a Collector Vehicle Insurance Agency.  Many were very pleased that we offered Agreed Value Insurance and On Track Physical Damage Insurance for HPDEs. 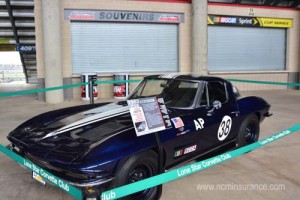 Each year they host a special display of cars, and this year was the Z06 display. They worked hard to get one Z06 from every year in production. The 1963 Z06 was a very hard year to obtain as only 199 total Z06s were produced, but the National Corvette Museum just happened to own one! Our car was generously donated to us by the late Leon Hurd. This car is very unique and rare as being one of the 6 cars sent to race teams to race, and part of the infamous back door program at GM. These 6 cars were produced at the assembly plant and then sent to Chevrolet engineering to be readied to race. Grady Davis of Gulf Oil was selected to purchase this car and run along-side Gulf Oil 1. Gulf Oil 1 and our car, Gulf Oil 2, ran the infamous 12 Hours of Sebring. 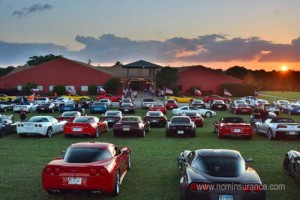 The event started on Friday with autocross in a parking lot at Texas Motor Speedway. While the autocross was happening, event registration and vendors were setting up inside the ballroom. Along with the NCM Insurance Agency the Museum store brings many of the shirts, hats, etc to sell to the participants. There was also a silent auction and some seminars covering a variety of topics. The day rounded down and the participants gather back at the Texas Motor Speedway infield for a parade lap of the high bank oval, a ride through the countryside sponsored by the NCM Insurance Agency, and then off to dinner at the Circle R Ranch. The ranch is a neat event venue that handled the 4 miles of Corvettes from every generation well, plus the TX style BBQ is spot on! Besides the scenery of cars the sunset was awesome!

Saturday started early for the show participants getting their cars ready to be judged. As I was getting ready in my room I could hear cars firing up and heading over before 6am. They wanted to look their best to compete for the many awards from the VIP picks, participant choice, Class awards, and the coveted Best of Show. I was asked to pick my favorite car, and I found this awesome 2014 Stingray Coupe, in Torch Red , lack wheels and great looking aero package! I told the winner that I have a love affair with red cars with black accents!

We unloaded our 1963 Z06 outside the gates and fired her up. The sound of a race prepared Z06 is something that needs to be enjoyed! (Check out this video of the Z06 coming out of the National Corvette Museum.)  We pulled in to a crowd of onlookers excited to hear this beast and see this beast run! After placing the car in its position we were off to get our booths setup to welcome the crowds! We had a great day, introducing people to the National Corvette Museum and our agency. We also enjoyed meeting many of our members and customers! 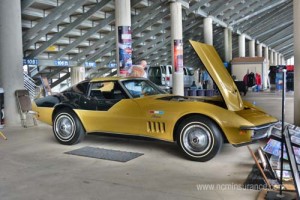 One of the neatest cars on display was the 1969 "Astrovette" that Alan Bean drove when he returned from his Apollo 12 Mission.  You can read more about this very significant Corvette over at CorvetteBlogger.

After the show is over we pack all of our stuff up and head over to the banquet. We pulled the Z06 onto the banquet floor for display, and she looked great!

The banquet started with much fanfare, with a great meal and great company. We were fortunate to be seated with our good friend, Doug Fehan of Corvette Racing. He was the guest speaker for the night. He talked about his career with General Motors and how he achieved the top seat in the racing program. He also talked about The 24 Hours of LeMans and what it takes to get there. His enthusiasm for the brand is contagious. If you aren't a Corvette Racing fan, you will be after hearing Doug talk.

Once Doug was finished we quickly made our segway into the Live Auction which brings out great Corvette Memorabilia and the usual gag gifts. We brought several banners that hung in or around the Museum, a front fascia from the Corvette C7.R, etc. Thousands of dollars are raised for several non-profit organizations, including the National Corvette Museum.

The evening concluded with the long awaited awards ceremony. Club members cheered for their friends as they won many of the awards of the night.

The event was a fantastic time, put on by a fantastic group of volunteers. They work all year to make sure that everyone has a great time. We cannot thank the Lone Star Corvette Club enough for their hospitality and the generosity they have towards the National Corvette Museum and the NCM Insurance Agency. I would encourage anyone who can to visit this show. You won't be disappointed!